First, I would like to thank everyone that attended our Holiday Banquet.  We had a great turnout, great entertainment and a great time! It was certainly an evening to remember!  Special shout-out  to everyone that helped out to make it memorable!As we wrap up 2018, I hope that everyone has a very happy and magical holiday season! We will not be meeting in December, but we will be lighting up the New Year with our annual Close-Up contest! We still need at least three more performers to participate in the contest. Your act should be seven to eight minutes long with the routines of your choice.

In February, we will learn effects from members of our group during our “Teach-a-trick”night.  This meeting is  open to all members and guests at no charge. Tricks may be any form of magic.  Maybe  someone from the Close-up contest will show us some of their secret moves, or if you want to try out a routine that night, please let me know. Call me to sign up to be a “Teacher”.

I am still working on dates and lectures for March and May. As soon as plans are finalized, we will let you know.

With our April auction, you can empty out your closets and clean house or fill the closet with more magic bargains! I am now taking  lists of sellers. The first seller to respond to me will be seller #1, second to respond will be seller #2, seller #3, etc.

In May, we will hold our elections.  We need members to step up and help the club be the best it can be! This is your club.  By being involved in the running of the club, you can make a difference!

Don Westermeyer has graciously offered his home for the site of our June 9th picnic. More details will follow as plans are made.  Many thanks in advance to Don!

All activities will continue to be held at the North College Hill Senior Center (except for the Picnic).

Ring #71 held its annual banquet on Saturday, November 17,, 2018 at the North College Hill Senior Center.  A crowd of almost sixty people enjoyed socializing, great food, a fun raffle, and two excellent magic shows.  Treasurer Mark Wiechman covered the sign-in desk and welcomed people to the event.  After welcoming remarks,  President Pat Hartzel passed the microphone to Ron Lawson, who served as Master of Ceremonies for the evening.  After giving thanks for the fellowship, attendees enjoyed a delicious meal of beef, chicken, beans, salad,  and desert, presented by Jack’s Catering.

Following dinner, the duo of “Jason and Lucas, the Greats” opened the evening with a high energy magic show.  Their first illusion involved Lucas (Jason’s son) entering into a Kovari Box, upon which Jason thrust several steel blades and a large tube through the box.  Timed to quick paced music, Jason spun the box around to so all audience members could see through the tube with the effect that Lucas had vanished. Once the blades and tube were withdrawn, the door opened and Jason appeared unharmed.  Jason proceeded with several additional effects, including silk-to-egg, balloon sword swallowing, needles and thread from mouth (assisted by Helen Fehn), and Jason’s signature “Rambo Ring Vanish Routine” with gumball machine and assistant Sarah.

During intermission, Chuck Arkin conducted a magic raffle of items donated by himself, Patrick Hartzel, and Helen Fehn.  Over 25 items were given out to successful winners, with “runner” assistance from Mark Wiechman, Lucas, and Chuck Meyer.

The second show featured “The Magic of Phil Dalton”.  With his entire family of performers, Phil delivered a quick-paced magic show to an appreciative audience.  Phil opened with his “Beside Myself” (Modern Art) illusion, and continued with a cut and restored rope routine.  Phil and his wife presented a Handsaw Illusion, demonstrated by a visible sawing through neck with no pain and good humor.  A nice “Reflection Levitation” body suspension featured Phil and one of his sons as a mad scientist.  Later, Phil had volunteer Clark  assist with tying up Phil’s wife with a rope and had a “costume change” with the Gypsy Mystery Rope routine.  The finale used “The Pyramid of Mystery” in which several items were magically transformed, leading to a very spectacular surprise ending!

After the show, attendees continued to visit and enjoy the warmth and friendships of the evening.  Many thanks to all our volunteers. 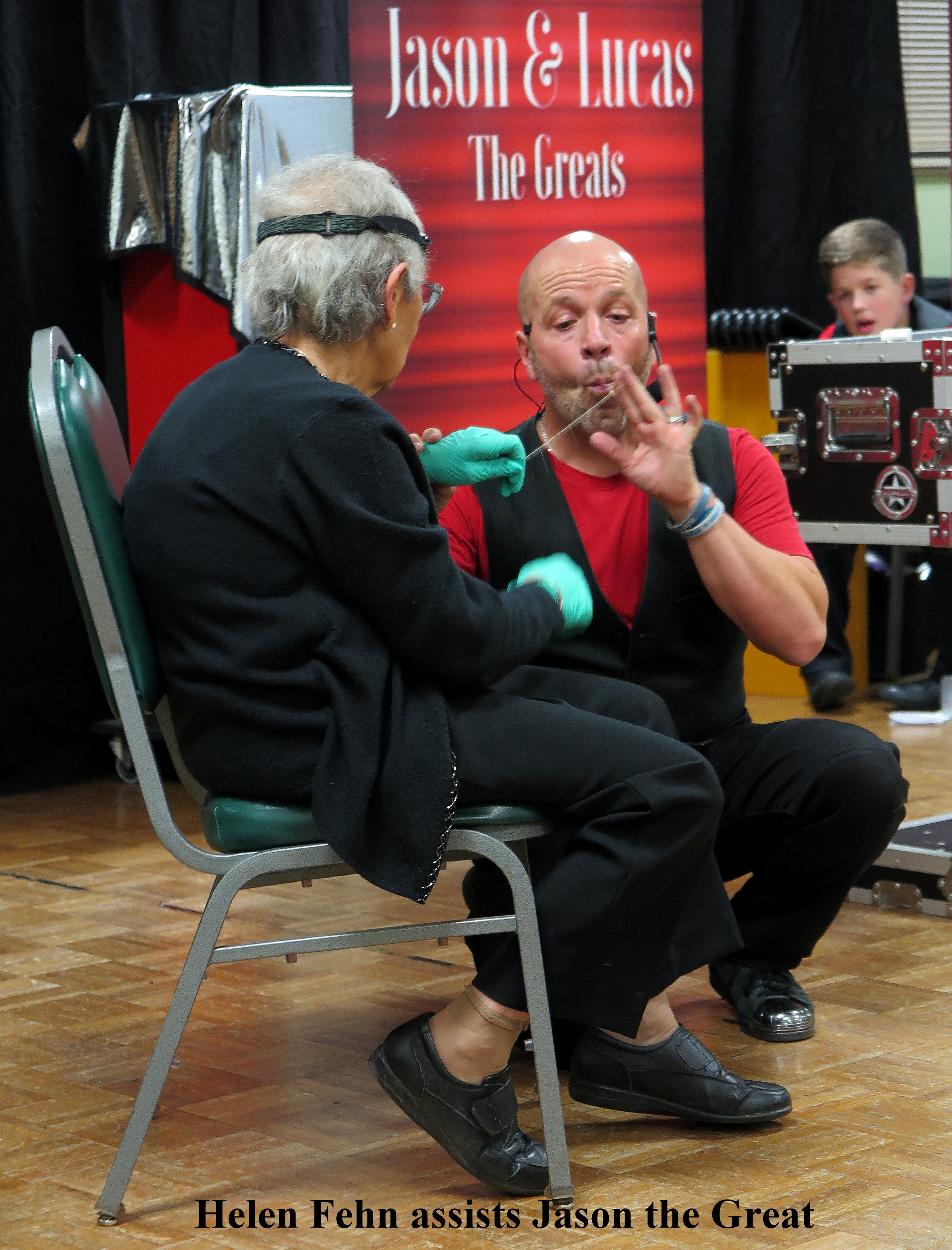 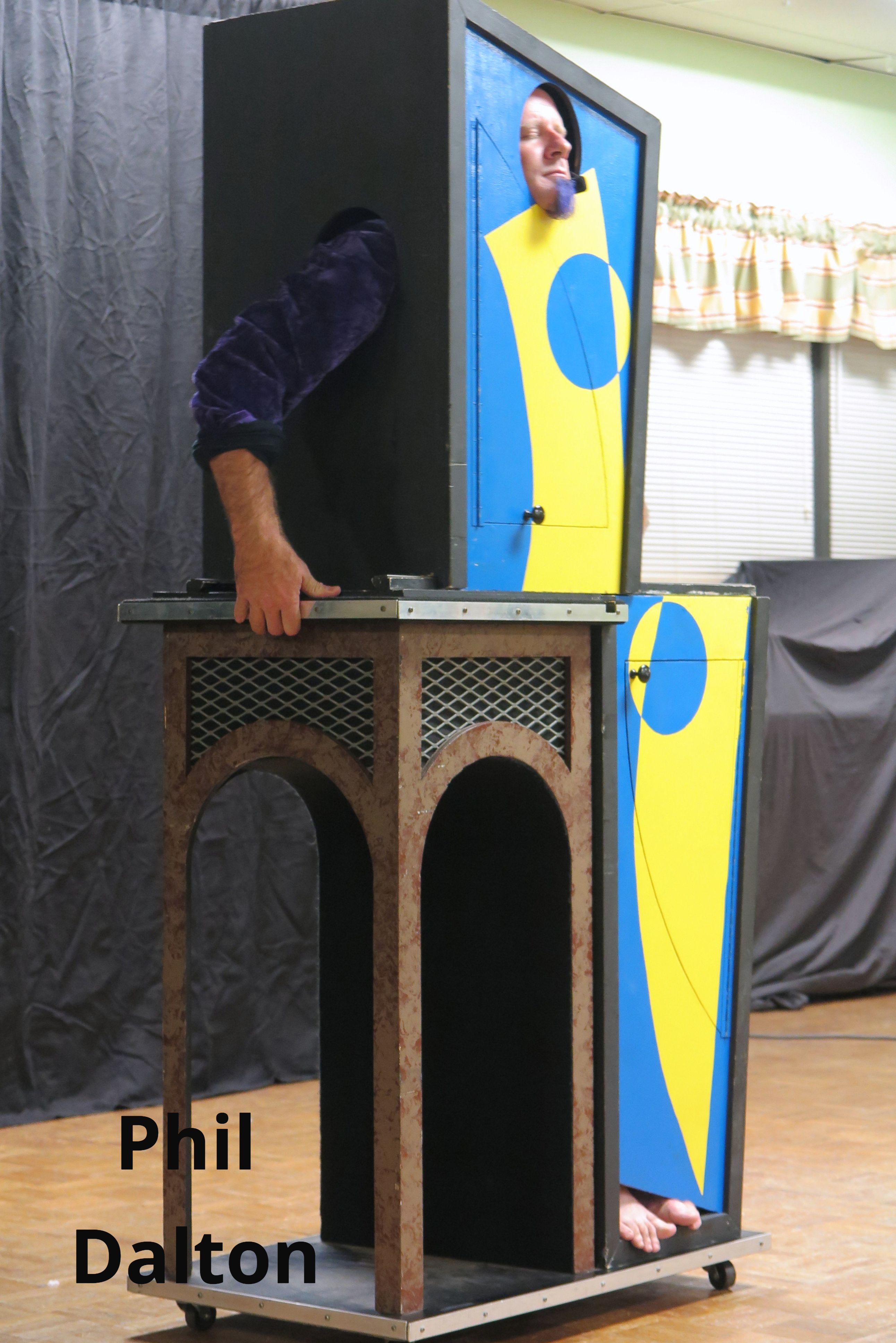