What a wonderful month we had in November!  It surely was magical!

I hope everyone who attended the IBM/SAM Banquet had a wonderful time!  Many thanks to Larry Payne, Bill Pryor, Mark Wiechman and a host of others in both clubs for their combined efforts to make the Banquet successful!

Members of the International IBM were treated to an issue of “The Linking Ring” whose cover was adorned with our own Bill Pryor!

On January 19th, we will be doing our “Teach-a-Trick” meeting.  Please let me know if you would like to teach! The date has been changed from the 26th which was the weekend of Magi-Fest.

Our tentative plans (subject to change) for the remainder of the year is as follows:

The Officers and Board Members wish all of you Season’s Greetings and best wishes for a Happy New Year!

BILL PRYOR GRACES THE COVER OF “THE LINKING RING”

It was with much anticipation and delight to see the smiling face of our own Bill Pryor on the cover of “The Linking Ring”!  The November issue contained a very well written article written by Chuck Sonenshein, which  captures the heart and soul of Bill’s love of magic and  his sense of humor. It is easy to see why he is the third  Dean of  Cincinnati Magicians! The issue also contained a congratulatory note from the members of the Ring, and he was also the feature of the “Hocus Pocus Parade”.  This nine page article showcases and explains many of Bill’s effects that he invented.

If you didn’t get enough of Bill in the November issue, he does re-appear in the December issue!  Bill was mentioned in the article about the Houdini Club of Wisconsin’s  Convention, where “Bill Pryor of Ohio dazzled convention goers with his fun, close-up magic with surprise endings, and a lot of prestidigitation techniques”. He is also the subject of the “Readers Write” column, written by our upcoming May lecturer, Tom Vorjohan. 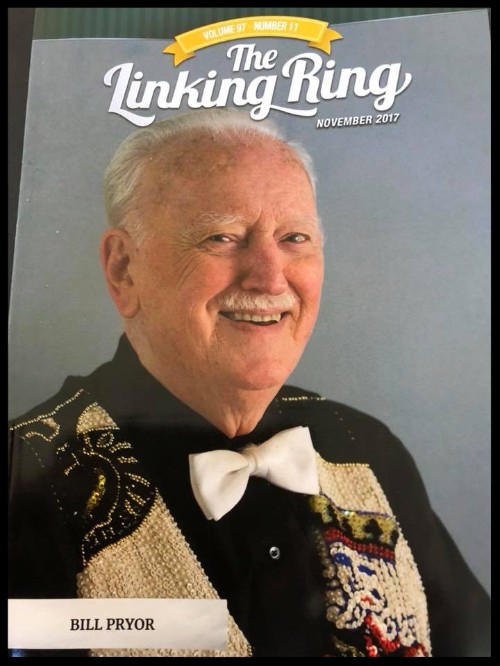 Cincinnati IBM Ring 71 and SAM Assembly 11 held two joint activities in November.  The first was a lecture on November 10th followed by a banquet and show on November 12th.  Kudos to Ring President Pat Hartzel and Assembly President Larry Payne for their leadership and positive energy which united the clubs for these two combined events.

At the Friday night lecture, President Hartzel announced a few upcoming events, namely “Teach-A-Trick” in January, the annual Close-Up contest in February, a lecture in March, Magic Auction on Saturday April 28th, Tom Vorjahan lecture in May, and the Picnic in June, 2018.  SAM President Larry Payne followed with details of Assembly plans including monthly magic themes and a promotional photo shoot in January.

The remainder of the evening featured the lecture and demonstrations of close-up and parlour magic by comedy magician Geoff Williams.  Geoff warmed up the audience by shuffling styles from around the world, including his Quadril 4-part false cut card flourishes, and the Jackie Chan Backhand spinning card catch.  His first effect was “This One”, in which the spectator selects two cards from a stack of business cards, revealing those two cards were the only two with writing on them  and the remaining cards were blank.  Geoff explained using the Charlier false shuffle with this routine. Next he demonstrated and explained his reverse torn and restored newspaper routine named “Newspaper Clippings”.  This and twenty-three other routines are superbly illustrated in his “..Violates My Parole..” lecture notes.

Among the evening’s favorite routines was the “Omega Bet”, used with permission from Bob Wagner’s “Master Notebook of Magic”.  This uses multiple volunteers who make progressive bets building to a spectacular climax.  This is just one of the awesome routines from Geoff’s “No Adults Supervision” double-pack lecture book containing forty-six amazing and easy to perform routines.  For impromptu strolling magic, the audience enjoyed the “Kewpie” routine which uses easy props to vanish and re-produce coins.  Geoff then shared his version of an Invisible Deck routine, using a different (non-CHSD) deck ordering system.  His “Bear Hands” (transposition of bear from a playing card to an unexpected place), sponge bunny production, floating card routine, torn and restored card method, and punched-and-restored raffle ticket routine were among the many additional effects which rounded out the evening.

The following evening, IBM and SAM held a joint dinner banquet at Tori’s Station in Fairfield, Ohio.  Each attendee received a free raffle ticket and door prizes from SAM Assembly President Larry Payne.  After a delicious dinner, we enjoyed a two-part stage show.  The opening act was the artistic marionette presentation by Kevin Frisch, of Frisch’s Marionettes,  which included dancing and comedic routines from each of the characters.

Between acts Larry Payne and Chuck Arkin distributed raffle prizes which were donated from several attendees.  To close out the evening, Geoff Williams provided the main act, with an expanded version of his comedy magic routines.  Geoff’s parlour magic was well received by the audience.  Among the favorites were his “Binkie The Chicken” routine, Slydini-type cut-and-restored rope routine, and balloon antics.  Special thanks to all our volunteers who helped make this banquet a great success! 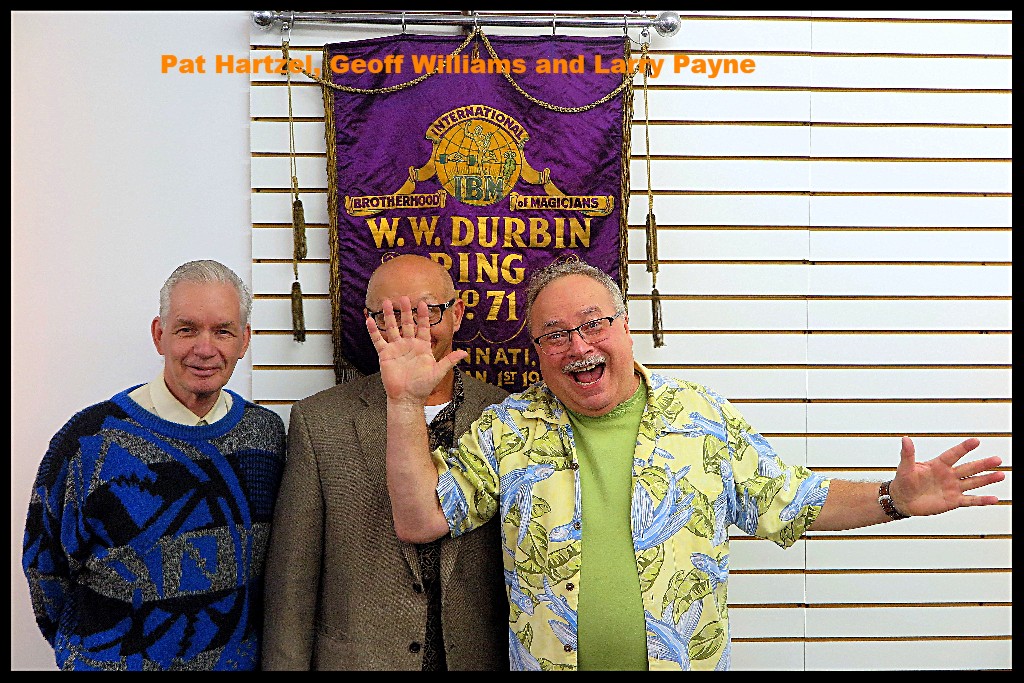 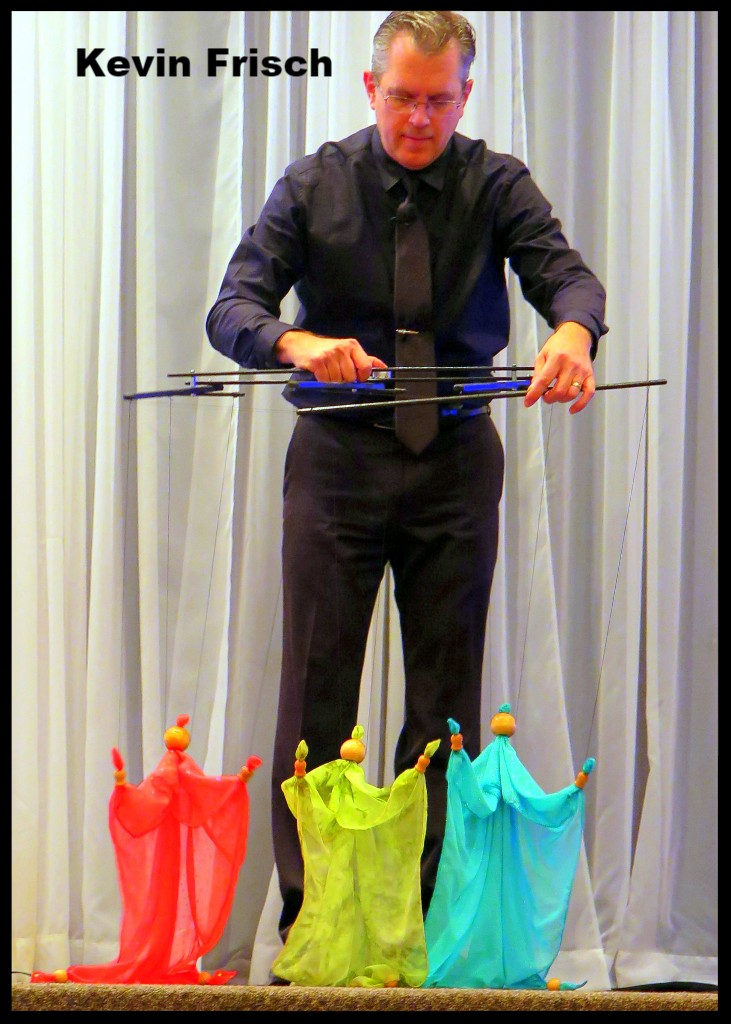